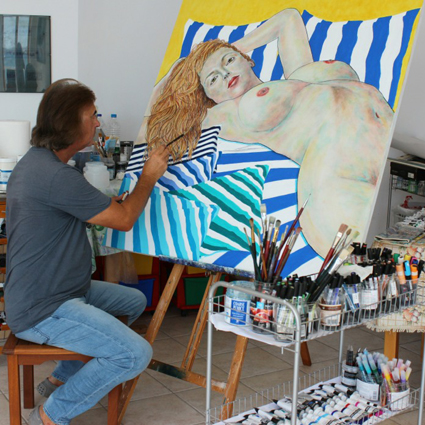 Exhibitions
Cassinari has exhibited in countless collective and individual exhibitions. Recently, in addition to the permanent exhibition in his atelier on the island of Milos in the summer, he regularly participates in the Art Fair in the city of Padua which is held every year in November, as a guest of the London gallery "White chameleon". 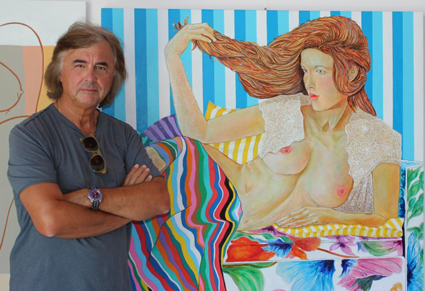 The works of Cassinari develop through two routes: impressionist painting, the main inspiration, and figurative . Two paths, which are joined by emotion with which the artist approaches to both: the female is just as inspiring as the infinite shades of the sky or the greek sea.

Impressionistic painting
The landscapes, lights, colours and natural souls of the island of Milos have profoundly influenced the painting of Cassinari, elements can be found in its continuous search for style and colour experiences. Impressionist painting becomes the palette Cassinari creates symphonies of colour dancing to create suggestions to the soul. He believes that an artist may grasp the finer vibrations of true reality in which we are immersed, not one that looks filtered by our brain but one with which our soul resonates spiritually, another dimension that you can not grasp with the mind but only through almost fleeting sensations of distant echoes, that become pure spirituality on canvas, waves of colour that now change, now dissolve, now reappear.

In short, the work of Cassinari is an attempt to represent by means of a pictorial language the leap of consciousness in front to not to be represented, to give voice to a silence that spreads and reverberates to the soul of the observer by evoking in him a subtle sudden emotion.

Figurative painting
Modigliani said that the beauty of the universe is contained in the look of a woman. According to Cassinari the wonder and reverence for the woman beauty coexist on the canvas with the strong emotions for the sensuality of the female body, emotions expressed by the contrast between sign and pure colour, chromatic masses opposed to the almost evanescence figures.

Women are now sensual, sometimes melancholy, sometimes mysterious, but always represented with physical intensity and subtlety of shape to make them palpable, to emphasize the preciousness of the female body.
The sinuous lines of bodies and breasts as opposed to spot colour masses of clothing and decorative details, positions and expressions of the figures represented with minimum chiaroscuro emphasizing only the details of the eyes and mouth, almost enchanted figures in their dreams, transmit vibration, mixed feelings and deep emotions.
Next
Previous